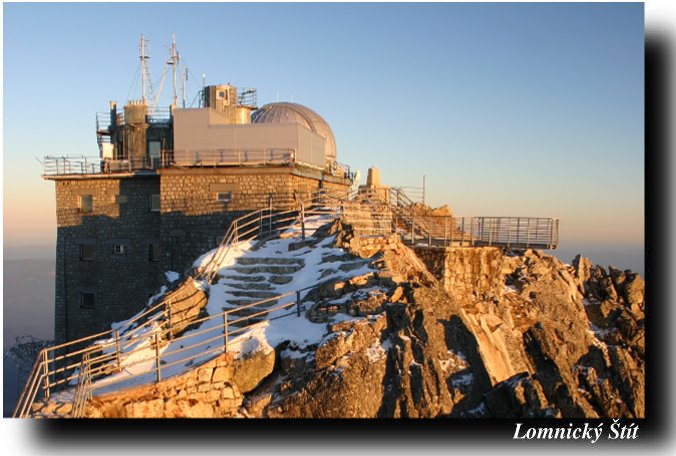 Initiated by the world-wide activity of the International Geophysical Year 1957 construction of an astronomical observatory on the Lomnicky peak was realized in the period 1957-1962. Here, at really a high-altitude height of 2633 meters above sea level, the first 20/300 cm ZEISS coronagraph was installed in 1962. First regular observations of the H alpha prominences started in 1962 and observations of the emission lines, originating in the solar  corona, in 1964. In 1970 the identical coronagraph was installed at the same mount. Today, the observatory ranks among just few existing ground-based observatories worldwide which systematically observe emission spectral lines of the solar corona. Researchers working at the Lomnicky Peak Observatory has prepared two long-term data sets of the solar coronal activity.

“The Homogeneous Data Set of the Green Coronal Emission Line Intensities” is compiled from the data of all coronal stations over the world since 1939 including the Lomnicky Stit Observatory. “The Green Coronal Index” is prepared on the base of the previous data set for the Sun-as-a-star.

In the recent years, these data sets maintained using measurements of the AIA instrument onboard of the SDO satellite by the staff of the Slovak central observatory in Hurbanovo (Slovakia).

“The Catalogue of the Solar H alpha Prominences” has been prepared using measurements performed at the Lomnicky Stit Observatory itself. Since 2009 it is extended using observations performed by the Kanzelhoehe Observatory for solar and environmental research (Austria).

In years 2011 and 2016, new instruments – Coronal Multi-Channel Polarimeter (CoMP-S) and Solar Chromospheric Detector (SCD) – developed by the staff of the HAO/NCAR (Boulder, CO, USA) have been installed at the coronagraphs. The first results have been already presented at the scientific conferences.

At the peak of the Lomnicky stit mountain there is also located Neutron Monitor and other instruments of the Department of Space Physics Institute of Experimental Physics in Kosice (Slovakia).
The Neutron monitor is continually in operation since December 1981 when it replaced the older one.

The following images illustrate the Lomnicky Stit Observatory and its observing instruments.

The following images illustrate examples of observations acquired by the observing instruments
of the Lomnicky Peak Observatory.